Minecraft is an open-world, sandbox video game developed almost ten years ago, in the middle of 2009. It remains one of the biggest video games in the world to this day, though its popularity reached its peak in roughly 2012, 2013, and 2014. It is playable on almost every device, and continues to get a fairly consistent stream of updates.

There are multiple game modes to choose from, but the main two are Creative and Survival. In Survival mode, you drop into a blocky world with diverse landscapes and nothing to call your own. After some hard work, you begin to build up your resources, and build whatever you want! You want some wood? Go outside and beat a tree down with your bare fists for wood planks! Need some light and maybe some stronger tools? Build a crafting table with your recently acquired wood, make a pickaxe, and dig a hole in the ground or take to a cave for some coal and iron ore.

Creative mode is a different story, however. Instead of starting from scratch with nothing, you have every resource imaginable at your unlimited disposal! Plus, flying and invincibility are a pretty handy perks. There are so many ways to play Minecraft, but one of the greatest things about it is that there are no rules! You can play with friends or solo, and the sky is literally the only limit for what you can build! 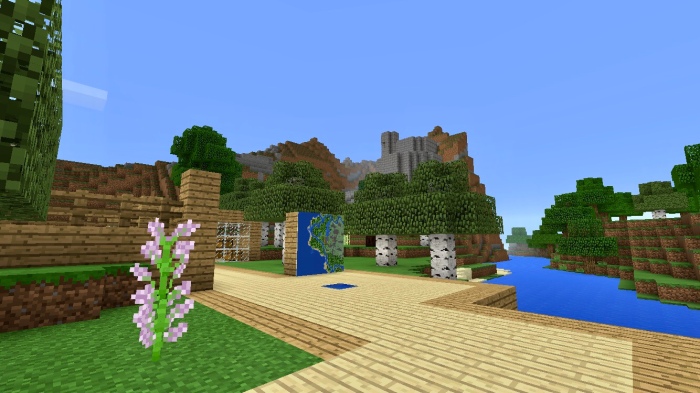 As fun as this game is, it can be problematic in certain areas for certain people. For example, at nighttime, monsters fancy coming out to ruin your plans. Of course, it’s a game made of cubes, so it is not realistic or extremely terrifying, but still, they can put a chill into your bones. Skeletons, Zombies, Witches, and Ghasts are some of the more problematic for certain people. I realize that lots of little children play the game with those elements anyways, but it’s something to at least give a thought to.

Fortunately, there are various levels of difficulty. When you set it to peaceful, the game eliminates all of the monsters from the world so that you can play in… well, peace! Really, it’s not that bad, it just depends more on personal preference for teens, at least. 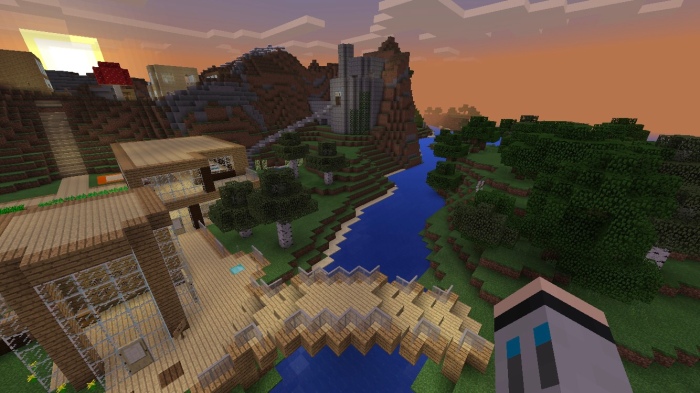 There’s a lot to love about Minecraft, and even though there’s a minute amount that’s not to love, it’s easy to sidestep. Two notes, though, before you go.

When you’re building all sorts of things from soccer fields to a life-size model of Washington, D.C., it’s really easy to lose track of time. And on the rare occasion, it’s possible, like with lots of video games, that you can get obsessed. Video games are great, fun, and all, but they’re not worth obsessing over. Trust me on this one.

Minecraft is tons of fun to play, but it can begin to feel lonely if you decide to go it alone. A pet parrot or puppy, or polar bear will only provide you so much company, so find some friends to play along! Depending on which version you play, there are some fantastic mini games to enjoy and utilize to have some fun with friends and family! I primarily play on the Xbox One, but let me know if you need a fellow gamer to play along with!

The game is a bunch of fun for everyone, and you get to express your creativity in any way you want!

You can go give it a look right here and figure out which version is best for you! Hope you all enjoyed this snapshot, and maybe you’ll enjoy the game too!

hi :) View all posts by josiah

One thought on “Minecraft”